And Jesus came to them and said: “All authority has been given to me in heaven and upon the earth. Having gone , therefore, make disciples of all the nations, baptizing them in the name of the Father and of the Son and of the Holy Spirit and teaching them to keep all that I have commanded you. And behold, I am with you every day, until the consummation of eternity.”

In todays’ world, everybody wants to have “groupies” or a “Fan Club.” We have Facebook friends, Twitter followers, and Instagram feeds. And then there is Snapchat, YouTube, Vine and numerous other platforms of social media which allow us to post everything about our lives for others to see (and hopefully cheer you on). Yet in each case, it allows you to remain disconnected from those who “friend” or “follow” you. Even in the days where “groupies” followed rock bands around our country, there remained a disconnect between those following and those being followed.

The church, though, is not called to attract a bunch of “disconnected followers.” We are called to make disciples. Thus, it is not good enough just to get people into the church and see God work salvation in their lives — that is but a beginning. We are called to baptize people and teach them to obey everything that Jesus taught as an expression of our love for Him (see John 14:15) … and since Jesus is the Word made flesh, that implies the whole of Scripture.

The church is also not to be disconnected, but we are to be a united body — a local fellowship of the body of Christ. We live in community with one another, celebrate each other’s victories and we grieve each other’s losses. When one part of the body hurts, the whole of the body hurts and, when the whole body is healthy, we share our gifts in the work of ministry. We are united both by the Spirit of God and by the covenant we make with one another as members.

Groupies come and groupies go, having fans is nice in the heat of the summer. Being disciples covenanted together as one body — that is something special and something that is only truly found in the church, not in the secular world. 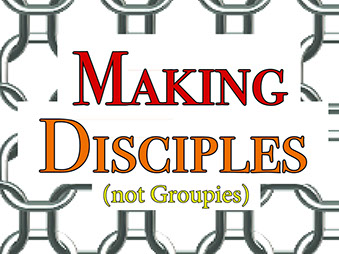