There have been many minor reformations in the history of the church that led up to what we commonly refer to as “The Reformation."There was Peter Waldo and the Waldensians in the 12th Century, John Wycliffe and the Lollards in the 14th Century, and Jan Hus and the Hussites in the 15th Century. Yet, when Martin Luther nailed what are now referred to as The Ninety-Five Theses to the door of the Castle Church in Wittenberg on October 31, 1517, Europe as people knew it began to become unglued.

It would not be long before Catholic Bishops were writing rebuttals and ordering Luther to recant his views.

Not too many miles away, in Paris, in 1533, a 24 year-old law student named, Jean Cauvin (better known today as John Calvin) was converted to the faith. Three years later, Calvin would publish the first edition of his Institutes of Christianity as a defense of the Reformed faith. By that time, Calvin had fled Paris for Strasburg, but while passing through Geneva, was convinced by another reformer, William Farel, to remain in Geneva as their pastor.

While Luther proved to be the preacher who would powerfully set off the theological powder keg that would result in the Reformation, Calvin proved to be the theologian and apologist for the same, giving the Reformation the roots it needed to spread and not be another localized movement like the Waldensians. Further, while Luther’s theological influence was focused primarily on Germany, Calvin was intensely mission-minded and sent out Reformed pastors to France, England, the Netherlands, Germany, the Czech Republic, and even as far away as Brazil. As a result, while heavily influenced by both Luther and Calvin, much of Europe ended up embracing the theological nuances of Calvinistic theology rather than that of Lutheran.

Yet, in the areas which we would refer to today as western Germany and eastern France, there several regions where there were both German Calvinistic and German Lutheran influences, which brought about numerous conflicts.

In a desire to unify this region, Elector Frederick III called on the University of Heidelberg to draft a doctrinal statement that would unify the two Christian groups. To accomplish this, Zacharius Ursinus and Caspar Olevianus were chosen as the primary authors, though other members of the faculty contributed to the final product, which was published in 1563. While embraced by the German Calvinistic churches, it was largely rejected by the German Lutheran churches as being “too Calvinistic” in its theology. It should be noted that while the German Lutheran churches rejected the document, the Dutch Calvinistic churches opted to embrace the document for use in their churches.

One of the hallmarks of the Heidelberg Catechism is that the document is primarily written in first person. That means the statements are not simply designed to be a recitation of facts, but it is a recitation of facts as they relate to me the believer. Thus the statements often use the terms “I” and “me.” It is the church’s belief that this makes the doctrine of this Confession more personal in nature and thus something that believers can cling to as their own.

This personal emphasis is best demonstrated in the first question and answer to the Catechism: “What is your only comfort in life and in death?”

Answer: “That I am not my own, but belong body and soul, in life and in death, to my faithful Savior Jesus Christ. He has fully paid for all my sins with his precious blood, and has set me free from the tyranny of the devil. He also watches over me in such a way that not a hair can fall from my head without the will of my Father in heaven: in fact, all things must work together for my salvation. Because I belong to him, Christ, by his Holy Spirit, assures me of eternal life and makes me wholeheartedly willing and ready from now on to live for him.”

Heidelberg is structured around three principles that can be summarized as “My Guilt”, “God’s Grace”, and “My Gratitude.” Again, this can be best seen in the language of the second question: “What must you know to live and die in the joy of this comfort?”

Answer: “Three things: first, how great my sin and misery are; second, how I am set free from all my sins and misery; third, how I am to thank God for such deliverance.”

The word “Catechism” is derived from a Greek word that means to sound or echo. Thus, it is structured with a series of questions about doctrine and the student is then called on the echo the answer in response. While this form of instruction may seem unusual to us in our modern era, for generations, this was the way in which teaching took place…going as far back as Socrates in Greece and to the Jewish Rabbis in Jesus’ day. Even as recently as 150 years ago, school textbooks would be structured as catechisms on geography, history, mathematics, etc…

It is our belief that a catechism also provides a concise system of theology that can be easily learned and accessed even later in life. This provides a basic framework for theological thinking for the rest of one’s life. Thus we encourage not only our youngsters but also our adults to study the catechism and the truths that it brings forth from the Word of God as a tool to help them live faithfully before God. 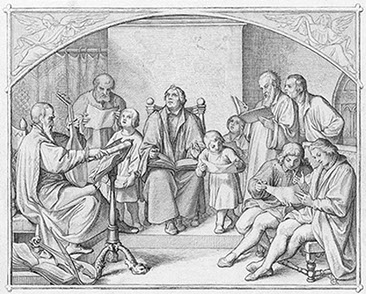